http://www.sinebrychoffintaidemuseo.fi/TUTUSTUMUSEOON/NAumlYTTELYT/Tulevat/tabid/94/articleType/ArticleView/articleId/137/HILJAISUUDEN-VYHYKE.aspx
Posted by NOMADIC ACADEMY OF EXPERIMENTAL ARTS at 2:23 AM No comments:

Join and Play in the Artists' Orchestra of Finland! A unique one-time performance at KIASMA Theater at 2pm on November 13, 2010.
Shinji Kanki, a Japanese composer (http://silakka.fi), is looking for as many artists(working with any visual/performance arts, but not with music) as possible to form a temporal orchestra in order to realize his newest composition "The Art of War - War Symphony" dedicated to all immigrant artists in Finland. The work is commissioned by the Charm of Sounds
Instruments required are Your everyday listening system, such as record player, cd player, c-cassette player, radio, mp3 player* , mobile phone, laptop, etc. (*with loudspeakers) together with Your favorite musics played on your listening system. You would read simple instructions how to "PLAY" your listening system.
Erkki Pirtola conducts the orchestra and Kalle Leino, a young painter plays drum as soloist. The estimated numbers of the orchestra players needed are between 60 - 100.
!The performance date: November 13, 2010 Saturday 2pm at KIASMA Theater -> http://www.kiasma.fi/index.php?id=2642 !The rehearsal** date: November 7, 2010 Sunday 4pm at Kuvataideakatemia Auditorium. Kaikukatu 4, 00530 Helsinki. http://www.kuva.fi/portal/
(**You do not need "instruments" for this rehearsal!) Contact: Shinji Kanki, email: kanki@silakka.fi
A musical composition by Shinji Kanki THE ART OF WAR - WAR SYMPHONY for Artists' Orchestra of Finland
1. WEAPONS DEPLOYED (=INSTRUMENTATION)
Any everyday LISTENING devices* that are used for PLAYING your favorite music such as Radios, CD players, Cassette players, Record players, Mp3 players, Laptops, Mobile phones, DAT players, and so on. PLUS with your FAVORITE MUSIC(S) WHATEVER they could be to be played.
*PLAY via Your LOUDSPEAKERS, any sizes or powers. NOT with headphones.
2. COMBAT POSITION & TACTICAL FORMATION - Battle field (= concert hall): KIASMA Theatre
- Army (= artist players) The orchestra(army) is divided into five units: 1) the left unit on the stage 2) the right unit on the stage 3) the left unit in the left aisle 4) the right unit in the right aisle 5) guerrillas in the audience.
The each unit representing : 1) & 2) Heavy, large listening devices (Fire arms & Bows). 3) & 4) Small devices, but powerful (Cavalries)
5) very small, mobile devices (Infantries)
- A Musician =A drum kit player: In the center stage - A Conductor =Director general: In the center front stage
Note: All the players on the stage as well as the drummer and the conductor should be positioned behind the main projector screen.
3. TIME LINE (SCENARIO)
A. OVERTURE (Pre-movements) The STAGE CUTAIN(=THE MAIN SCREEN on which the image of the theatre curtain is projected) opens(raises) very very slowly.
Play, during the curtain rise, the recording of a Finnish cavalry's battle march (Hakkapeliitain Marssi = Hakkaa Päälle! March=Hack Head march) together with strong beats of the Bass drum(=bombardment) by the drum player. The beats should not be in synch with the march beat!
As soon as the curtain has risen all up to the end and the march has stopped, ENTER straight into the first movement.
B. MOVEMENTS (No breaks between each movement=Attacca) NOTE: The short text for the each movement mentioned below should be said in Chinese by the conductor before the each movement starts.
MOVEMENT 1
- The conductor READs: Let your rapidity be that of the wind (其疾如風)
Introducing all the players (=army):Appearance of each player (soldier) playing its "instrument" in a quick manner. First the left unit on the stage. Then the right unit on the stage. Then moves to the right and left in the aisles. Then very randomly Improvise the movement of appearance. In the end, adding the players placed in the audience (guerrilla soldiers). Each player should play a few seconds to show what sounds they got. All appearance of sounds in Rapid and PP, very very softly. Almost inaudible.
THEN IMPROVISE THE APPEARANCE! LOOK CAREFULLY AT THE CONDUCTOR'S BUTTON. AFTER ENTRY OF ALL THE PLAYERS DONE, THE CONDUCTOR IMPROVISES FREELY WITH SOUND APPEARANCE.
For the above improv. each player could play longer, but keep it very QUITE! LIKE SOFT WIND.MOVEMENT 2
- The conductor READs: Stay as silent as forest (其徐如林)
Threaten the enemy (= audience) without showing(sounding) NOTHING! ABSOLUTE SILENCE that should cause VERY MUCH TENSION. Cage's 4'33" QUOTATION -> OR it could be 3'44". NOT divided to 3 movements as Cage wrote but just one long silence. THE CONDUCTOR CHECK THE TIME WITH A TIME WATCH.
MOVEMENT 3
- The conductor READs: In raiding and plundering be like fire, attack as fierce as fire (侵掠如火)
Announcing ATTACK by DRUM ENTRY (RUSH IN FURIOUSLY!). DRUM IMPROVISATION. KEEP ON PLAYING for the whole movement. Then, adding to the drum, the conductor should improvise the entry(=attack) of the sounds by the each unit. First separately, some units together and then, All together: TUTTI. THE CONDUCTOR IMPROVISES, SO WITH THE PLAYERS! ATTACK THE AUDIENCE!!
Put EAR PLUGS Whenever you need them!
MOVEMENT 4
- The conductor READs (or this time, SHOUT): Be immovable like a mountain (不動如山)
CONTINUE TUTTI from the 3rd movement. The DRUM plays a steady BEAT eavery 5 seconds. Then Add NOISE Feedback with the house PA as loud as possible. Just let the ALL play without everyone controlling the equipments (Just let it go!) Keep it playing.
Enter MAAMME by FREDRIK PACIUS (the Immigrant composer!!) in a good suitable timing either by the conductor's cue or freely by the mixer engineer. SING ALL TOGETHER AS VICTORY SONG! For dedication to all immigrant artists in Finland.
AFTER SINGING ENDS, CUT THE SOUNDS ALL TOGETHER BY THE CONDUCTOR'S CUE.(END)
Posted by NOMADIC ACADEMY OF EXPERIMENTAL ARTS at 12:27 PM No comments:

http://www.altparty.org/2010/
Posted by NOMADIC ACADEMY OF EXPERIMENTAL ARTS at 9:08 PM No comments:

Posted by NOMADIC ACADEMY OF EXPERIMENTAL ARTS at 10:35 AM No comments:

http://artandeducation.net/announcements/view/1295
Posted by NOMADIC ACADEMY OF EXPERIMENTAL ARTS at 7:13 PM No comments:


Posted by NOMADIC ACADEMY OF EXPERIMENTAL ARTS at 8:21 PM 2 comments: 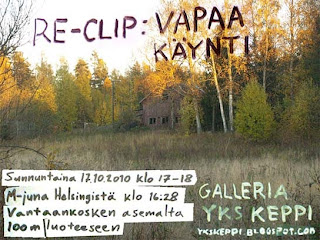 "The gallery might be a hole in the ground or some guy's underwear,
but as examples of possibilities they are ruled out as such."


http://ykskeppi.blogspot.com/
Posted by NOMADIC ACADEMY OF EXPERIMENTAL ARTS at 1:59 PM No comments:

http://cartes-art.fi/flux2010/?page_id=58
Posted by NOMADIC ACADEMY OF EXPERIMENTAL ARTS at 1:32 PM No comments:

http://www.kiasma.fi/index.php?id=2654
Posted by NOMADIC ACADEMY OF EXPERIMENTAL ARTS at 5:02 PM No comments:

http://www.modernamuseet.se/sv/Stockholm/Program/The-Sten-Hanson-Festival/
Posted by NOMADIC ACADEMY OF EXPERIMENTAL ARTS at 5:00 PM No comments:

Posted by NOMADIC ACADEMY OF EXPERIMENTAL ARTS at 4:57 PM No comments:

"As you well know it was God who created this Earth and everything on it. And he thought it was all great. All painters and poets and musicians sang and celebrated the creation and that was all OK. But not for real. Something was missing. So about 100 years ago God decided to create the motion picture camera. And he did so. And then he created a filmmaker and said, “Now here is an instrument called the motion picture camera. Go and film and celebrate the beauty of the creation and the dreams of human spirit, and have fun with it.”

But the devil did not like that. So he placed a money bag in front of the camera and said to the filmmakers, ‘Why do you want to celebrate the beauty of the world and the spirit of it if you can make money with this instrument?” And, believe it or not, all the filmmakers ran after the money bag. The Lord realized he had made a mistake. So, some 25 years later, to correct his mistake, God created independent avant-garde filmmakers and said, “Here is the camera. Take it and go into the world and sing the beauty of all creation, and have fun with it. But you will have a difficult time doing it, and you will never make any money with this instrument."

In the times of bigness, spectaculars, one hundred million dollar movie productions, I want to speak for the small, invisible acts of human spirit: so subtle, so small, that they die when brought out under the clean lights. I want to celebrate the small forms of cinema: the lyrical form, the poem, the watercolor, etude, sketch, portrait, arabesque, and bagatelle, and little 8mm songs. In the times when everybody wants to succeed and sell, I want to celebrate those who embrace social and daily tailor to pursue the invisible, the personal things that bring no money and no bread and make no contemporary history, art history or any other history. I am for art which we do for each other, as friends.

I am standing in the middle of the information highway and laughing, because a butterfly on a little flower somewhere in China just fluttered its wings, and I know that the entire history, culture will drastically change because of that fluttering. A Super 8mm camera just made a little soft buzz somewhere, somewhere on the lower east side of New York, and the world will never be the same.

∗ This text was presented at the American Center in Paris, February 11, 1996 and first published by agnès b. as a large format, 8-page artist’s magazine inpoint d’ironie, no. 1 (Paris, 1996)

The whole text:
http://www.aphotostudent.com/2010/09/21/jonas-mekas-anti-100-years-of-cinema-manifesto/
Posted by NOMADIC ACADEMY OF EXPERIMENTAL ARTS at 3:07 AM No comments:

Posted by NOMADIC ACADEMY OF EXPERIMENTAL ARTS at 6:10 PM No comments:

http://www.helsinginuutiset.fi/Uutiset/Uutiset/Kaveriporukan-leffailloista-kasvoi-kokeilunhaluinen-Kino-Kaiku
Posted by NOMADIC ACADEMY OF EXPERIMENTAL ARTS at 5:22 PM No comments:

Posted by NOMADIC ACADEMY OF EXPERIMENTAL ARTS at 4:35 PM No comments: